My mother used to say, “beautiful young ladies do not swear.” We’re only beautiful and young for so long, mother. What happens when we’re “of a certain age” and “barely a 5”? Hey. Maybe that’s why I swear so much. I’m old and a solid 5. I’ve earned the right to say bitch, shit, ass hole, and fuck as much as I want, haven’t I?

On the other hand, at my age, shouldn’t I have come up with more intelligent sounding terminology by now? I mean, anybody can say “bitch, shit, ass hole, and fuck.” It’s easy. Lazy. Lowest common denominator.

It takes a smarty-pants to correctly use invectives such as “bull’s pizzle” or “rump-fed runion” in a sentence. “Away, you three-inch fool!” might hit a nerve with some over-compensating men. “More of your conversation would infect my brain” is mildly offensive. But if I use the insult “Thou clay-brained guts, thou knotty-pated fool, thou whoreson obscene greasy tallow-catch!” I am definitely gonna get the shit kicked out of me. Not because I just pissed-off some neanderthal at the bar, but because I’ll sound like a complete fucking, pseudo-intellectual imbecile.

In other words, I’ll sound cray-cray while I’m tryin’ to throw shade, bruh.

Shakespearean slurs or Millennial gobbledygook. Either way, even I would want to kick my ass.

See what I’m up against? Where does this leave me? How am I supposed to offend, affront, slight?

Aaaaaaaand that brings me back to “fuck.”

Surely at my age I can do better. But, do I want to?

Sometimes the only label that fits is “bitch” (well, ok, sometimes a “C U Next Tuesday” is in order, but I hate that word so I only use it in case of emergency).

Sometimes you don’t have a choice, because, let’s be honest, does “that mean man who abused that puppy should go to jail” really convey the vileness of that human and his behavior?

How about this: “That fucking mother-fucker who abused that poor puppy should rot in jail and while he’s there, someone should treat him how he treated his dog. Hit the fucker as hard as you can over and over and over, slap the piece of shit when he makes a noise, put a cigarette out on the ass hole’s stomach, starve his ass, and cut off his ears when the god-damn mother-fucker doesn’t do what he’s told—or when you’re bored. Oh, and while you’re at it? Would somebody please chain that vile, waste of space, human piece of shit to a fence or something in the yard and make him sit outside alone and ignored during the worst fuckin’ blizzard in 50 years?”

Made my point, didn’t I? You know exactly how I feel about that “mean man,” and you know that if I ever see you abuse an animal that I will personally beat the mother-fucking shit out of you.

See? Sometimes I have to swear, it’s not optional.

Even at my age. 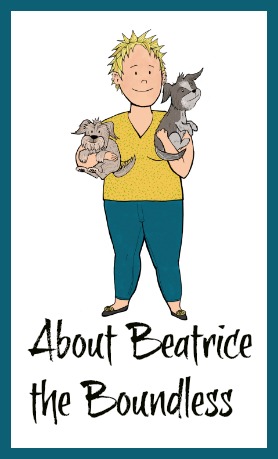