I’m the third daughter, which means that I have two older, perfect sisters and three younger, perfect sisters who have never screwed up or done anything wrong in their lives. Bitches. I’d like to take a moment to introduce you to them: Eldest, Smartest, Sweetest, Skinniest, and Baby.

Eldest is smart and opinionated and articulate. It sucks when an opinionated sister is articulate, because she can argue her point and you can’t and then she wins and you’re kind of left in the dust muttering “Shut up.”

Smartest is smart, obviously, but she’s also perfect and the best at EVERYTHING! I mean, everything. It’s so irritating. She’s good at math, English, drama, history, geography, debate, being nice to everybody (why do I have to be nice to everybody, by the way?), religion, singing, volleyball, writing, getting teachers to love her, did I mention smart? And did I mention getting everyone to love her, not just teachers?

And then there’s me. Beatrice. 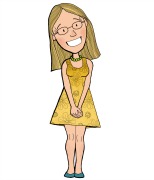 Sweetest didn’t always used to be sweet. Sometimes she was just plain mean. Like the time she sat on my Barbie on purpose. On purpose! So I had to bite her shoulder. Now she’s sweet and kind and generous. But oh the stories leading up to this…. Don’t worry. You’ll hear them.

Skinniest is also the tallest, but if I were her, I’d rather be called Skinniest than Tallest. Wouldn’t you? Skinniest is very good-natured and adventurous and goes along with any plan until she calls last minute to cancel because she’s over-committed due to her FOMO. Plus it’s impolite to tell people no. Her religion taught her well.

Baby. Baby is the baby and got all the rewards of the baby. No curfew, more clothes, fewer rules. But the biggest injustice? She always got to sit in the front seat next to mom. Stupid baby.

You know how you hear stories of sisters who had knock-down, drag-out, hair-pulling screaming matches that ended up with somebody’s new blue sweater clogging the toilet and somebody else’s favorite earrings from her foxy boyfriend, Clint, thrown into the backyard and lost in the grass forever? That wasn’t us.

No we pretty much perfected the art of passive aggression. “Sure you can wear my jeans…just don’t stretch them out.” That was me saying that, by the way, to Smartest. Smartest is now like a hundred pounds skinnier than I am. Karma’s a bitch.

“Todd’s really smart. That’s why he likes you, because he can come home after a long, erudite day at school and not have to think or have intellectual conversations.” Eldest said that to me when I had a huge crush on a friend of hers my freshman year of college, and yes, she really used the word “erudite.” And yes, I had to look it up.

“I’m sure you’ll be very happy in the Terrestrial Kingdom (that’s a Mormon thing that I’ll explain later).” That was Smartest telling me that I wouldn’t be going to heaven, due to my lack of activity in “THE” church.

See? Passive aggressive. So much more effective than yelling and hard-core hair-pulling any day.

And is it possible that this passive aggression wormed its way into the rest of my relationships? Friends? Work? Men?

Nah. Although the basement would tell you otherwise.